Former Cardiff City skipper Graham Kavanagh, one of the most popular Bluebirds of the past decade, scored the first ever goal - a typical Kav Cracker by all accounts - as Lennie Lawrence’s All Stars beat Eddie May's version 3-1 as the new Cardiff City stadium . 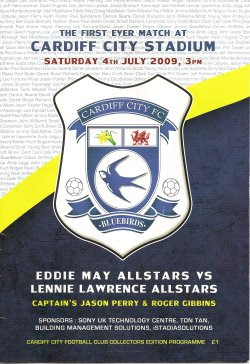 This was the first of a number of 'ramp' events leading upto the League opener against Scunthorpe on August 8 and apart from catering prices (the price you pay for selling your soul to Compass - £4.50 a hot dig FFS), everyone left impressed with our new home. The crowd of 4,916 disappointed a few but it was a nothing game not involving Cardiff City and we couldn't pull that crowd for league games not so many years ago.

Kav eulogised about the stadium and the club when speaking to Wales Online - "The new stadium has been talked about for such a long time – it was one of the factors which first brought me to Cardiff from Stoke City eight years ago. The atmosphere was excellent and the place will be rocking when it’s full for the opening Championship match against Scunthorpe.

“It was bitterly disappointing for everybody when Cardiff City just missed out on the play-offs last season, but they are making great progress and the stadium helps. The facilities are Premier League quality and I’d love to see the Bluebirds make that step up to the top flight this season."

For the record of goals, Paul Sanderson (leg 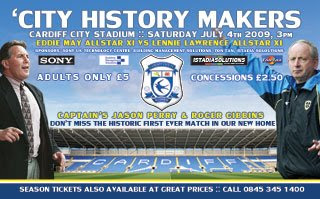 end???) levelled Kav's effort but in a second half that featured almost as many local "celebrities" as players, a Derek Brazil own goal and a John Williams effort concluded matters.

Posted by NigelBlues at 5:27 pm